-How sad it is... they finally managed to get what they wanted: a dead neighborhood, with no life in it. What will I do? I will die inside that flat. I don't know what to do in that balcony, I just read the newspaper... so I come back here, to see if I find somebody to chat a while, like I always did. We like to be in the streets... (a neighbor of "Colonia Castells") Barcelona is changing. From a "lowercase" city, made of small one-storey houses, to an "Uppercase" city: Big Intensive Buildings, Vertical Standardization, Big Commercial Avenues. In "Colonia Castells", a small "residual" one-storey neighborhood, just below Barcelona's most important commercial areas (the Diagonal avenue), decades of plans and projects managed to convert an ancient working class neighborhood built in the 20s, into a transitional space, constantly waiting for the demolition: an urbanistic and social "death row". The residents of this and others "black holes" embody the precariousness and uncertainty in which they are banished, and begin to present the symptoms of an individual and collective "urban renewal syndrome", that breaks the community bounds and strengthens both individualism and general diffidence. The neighborhood turns into a sad and uncomfortable place to stay, and the same inhabitants who once loved it now forcedly end up wishing to leave it. 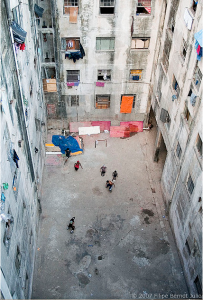 The Grupo de Estudo sobre Sao Paulo GESP – Laboratorio de Geografía Urbana LABUR studies the growth of Sao Paulo metropolis, within the Department of Geography of the University of Sao Paulo (the webpage is very interesting). Some of its members will be in Barcelona on friday october 29th, 2010, and will held a seminary on Problems in brasilian urbanization: new strategies for production of the space. Time: 10:00, Room 505, 2nd floor, Faculty of Geografía y historia. Calle Montalegre 6, Raval, Barcelona. Hablan: Marcela Nascimiento, Fabiana Valdoski Ribeiro, Danilo Volochko. Modera: Rosa Tello.

In Marco Ferreri's movie Touché pas à la femme blanche (1974) the indians are the former residents evicted from the center of Paris, and the cowboys are gunmen of the real estate speculators who try to exterminate them. The canyon is the enormous hole left after the demolition of the Baltard padillions, on september 6th, 1971. Just as the boulevards opened by Haussman in the end of the XIX century was an urbanistic response to the Paris 1870 Commune, the demolitions of the “ventre de Paris” and its transformation into a business and cultural center, in some way is a response to the need of punishing the city after may of 1968. The empty space of Chatelet-Les Halles today highlightens the persistence of the exclusion of young people coming in from the banlieues with the RER train (as in the movie La Haine by M.Kassovitz [1][2]). This had been already written by those who criticized the demolitions in the seventies. The most important of them is the journalist André Fermigier, whose articles are published in La bataille de Paris. De Les Halles à la Pyramide, chroniques d’urbanisme: “Do you want Paris in the year 2000 to become a city in which the young people will have no means to live?” (1971). Or Michel Ragon in Les erreurs monumentales: “Will Paris in the future be a ring of satellite cities around a dead center, converted into an open-air museum, like in Venice?”. Paris City Council is planning a new, enormous, project for the renewal of that part of the center.

“…on saturdays we went out, and she and her sister remained with our neighbor, miss Maria, and wouldn't come with us. [...] We would have taken them to the cinema, to Mcdonald’s, but they didn't want! They wanted to stay here in the alley“. This short video documentary by Jordi Secall, Manel Muntaner, Yolanda Bermúdez and Chema Alonso (2004) describes the demolition of the small “Passatge Cusidó”, just on the side of Barcelona's Diagonal. A real estate company, “Espais” (recently under trial for corruption within the Caso Pretoria) took advantage of the forced expropiation of this small alley, executed by Barcelona's City Council within the “22@” urban renewal project for the neighborhood of Poblenou. More info in this research draft written in 2006 by our group-

“The neighborhood doesn’t have to be a closed community, nor a museum of past history: it shouldn’t be like this. The neighborhood, in a dynamic city, is driven by a constant process of tranformation, to continuous deconstructions and reconstructions that descends from various factors, for example to the same biology of human life. But the changes not always mean an enrichment. A neighborhood can also die and disappear, tranform into a space that is only residential, an agglomeration of private spaces without place nor common life“. From Manifiesto por San Bernardo, document about the transformation of the neighborhood of San Bernardo in Sevilla, and about the resistence movements who are leading its inhabitants. See also the webpage of the network of neighborhood struggles in Sevilla.…

Call for Papers for the annual conference of the Commission on Urban Anthropology del IUAES (International Union of Anthropological and Ethnological Sciences). The title is: “Market vs Society? Human principles and economic rationale in changing times”.

More about Greece: article about strategies of counter-insurgency after the rebellions of december, especially in the Exarchia neighborhood (Athens).
…