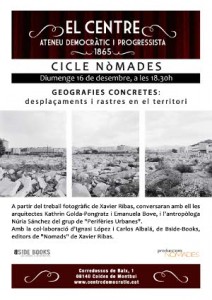 This sunday 16th at 6:30pm the anthropologist Maite Marín and the photographer Jordi R. Renom invite us to the last nomadic trip organized in “El Centre”, Ateneu democràtic i progressista de Caldes de Montbui, doubtlessly so interesting as the previous sessions of  Nòmades cycle, that are taking place since one year ago. In this session they will show us the photographic project of Xavier Ribas, and starting from it we will hold a debate among photography, urbanism, architecture, anthropology. To the conversation are also invited the urbanist-photographer-arquitect Kathrin Golda-Pongratz, the architect Emanuela Bove from Repensar Bonpastor, and the anthropologist Núria Sánchez Armengol, a member of our research group. The work of Xavier Ribas Nòmades deals with issues such as limits, frontiers, expulsions from territory,  everyday life, simbolic violence and historical memory, starting from photos taken in peripheral territories. Xavier Ribes has been working since 1994 on different projects in urban peripheries. “…Peripheries are not all the same. In Barcelona is not the same thing if you visit Besós or Llobregat, or if you go to Nou Barris, Pedralbes, or Sarrià…  I’m interested in periphery, among other issues, because it is a counterpoint, or countervision, to the city thought from the center. If contemporary city differ in something, these are their peripheries more than in their urban centers. So, we could say that the true character of the cities is in there, and that peripheries, more than equalize, generate identities”. [link on blog “a sangre” by Francisco Navammuel]