This IV edition of the course Ethnographic Methods in Planning Research is part of the emerging debate on the contributions of ethnographic studies to architectural research.
John F. C. Turner (*1927) is an English architect known for its engagement with the study and practice of self-construction. He was influenced by Patrick Geddes and anarchism, he studied in London's Architectural Association, and very soon developed an interpretation of planning and architecture that does not overlook the relationship with its users
What happened with the Euromediterranée, an ambitious project that costed over 3,5 billion euros, and that transformed 480 hectars? Can we get rid of it by simply calling it gentrification? A commentary by two Italian planners, R. Marchini & A. Sotgia.
In crossing the Isola neighborhood in Milan, whoever knows Barcelona suffers a kind of déja vu. The same buildings, the same companies, the same destruction as in Poblenou in 2004. Nouvel is replaced by Boeri, and the Universal Forum of Cultures with the Expo 2015.
Stefano Portelli's La ciudad horizontal (Bellaterra, 2015), a research on Bon Pastor's 'casas baratas': a neighborhood where no serious fieldwork can be led without getting involved, without challenging the existing barriers, without revealing clearly the aims behind the research itself. In this case, those are to influence urban planning, to stop the demolition of the neighborhood, and to demand an active role for the residents in the transformations of their territories.
The Heygate Was Home Digital Archive collects the testimony of several former residents of Heygate, social housing estate in Elephant & Castle, London - they were in the wrong place at the wrong time.
The spatial conflict over Palestine has re-articulated a certain principle: to be governed the territory must be constantly redesigned. This goes beyond a search for a stable and permanent “governable” colonial form, but rather points to the fact that it is through the constant transformation of space that this process of colonization has played out. Unpredictability and the appearance of anarchy are part of this violent logic of disorder. 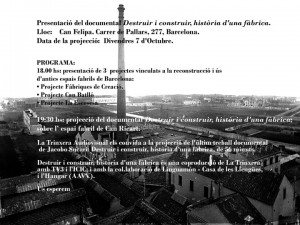 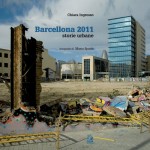 These two freshly published books by Chiara Ingrosso provide new insights on Barcelona's urban and architectural history: the first analizes the city transformations from Franco's dictatorship to future urban plans; the second draws a route around four neighborhoods, Barceloneta, Poblenou, La Mina and Bon Pastor. Both of them are illustrated with Mario Spada photographies, and, as a whole, they show the catalan capital very different as how it is usually represented in Europe and in the whole world, underlining its several dark sides.
During the years 2009 and 2011, some members of our research group helped in the organization of Repensar BonpastorInternational Competition of Ideas promoted by a group of architects and urbanists from Barcelona with the collaboration of the International Alliance of Inhabitants. After various years of fieldwork (2004, 2009) in Bon Pastor's casas baratas, and helped by the stable relationships we entailed with a series of families of residents, we reached a conclusion: that in spite of the media and institution constantly repeating how this neighborhood is in need of "renewal" (the word they use to say "demolition"), other solutions are possible, for this group of social houses, "red" and popular, built by Barcelona's City Council in 1929: it could be possible to preserve the historical and social peculiarity that this neighborhood represents for its residents and for all the city. Cultures, habitus, techniques and languages developed during decades by the inhabitants of the 784 casas baratas, and deeply rooted in this particular style of housing, will not survive after the demolition of the neighborhood. Even many of its inhabitants, since "modernity" arrived to the neighborhood under the form of demolitions, had to leave the neighborhood or suffered violent evictions.