As opposed to the orientalist stereotypes depicting Kathmandu (Nepal) as a place out of time and of the world, the social reality of Nepal reveals an admirable vivacity. Artists and intellectuals participate in this debates, contributing to make it a laboratory of postsecularism and "multiple modernities". 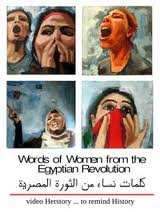 "Allowing my daughter to sleep in Tahrir, of course, was a revolutionary decision. This is the effect of the revolution on our way of thinking and dealing with things".Hanan Sadek, 52, works in an oil company "I'll never forget the way that soldier looked. He wouldn't look at me, he was looking away. Deliberately trying to avoid eye-contact with me, and he was crying. Then all at a sudden they all started to shoot at the same time" Sanaa Seif, 17, student "We were living with our eyes closed. We didn't use to see what is in front of our eyes" Mona Hussein, 50, housewife Every week, the independent equipe of Leil-Zahra MORTADA uploads in "Words of Women from the Egyptian Revolution" a short video: the revolution should not be explained as dominant history always does, as virile adventures of heroes and martyrs. Herstory is the version that even revolution enthusiasts try to keep silent: because the existence of rebel arab women is too big a contradiction for the standard version of history.