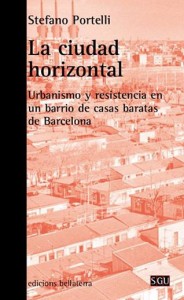 After Pere López Sánchez’s Rastros de rostros en un prado rojo (y negro) (Virus, 2014), about the neighborhood of ‘casas baratas’ (cheap houses) of Can Tunis in the Thirties, now we have Stefano Portelli’s La ciudad horizontal (Bellaterra, 2015), a research on Bon Pastor’s ‘casas baratas’, from their construction in 1929 until the start of their demolition between 2007 and 2012. These peripheral areas, neglected by economy, criminalized by politics, stigmatized by society, are also ignored by research: mainly because, as in many other working class neighborhoods, it is impossible to do a serious fieldwork there without getting involved, without challenging the existing barriers, without revealing clearly – horizontally – what are the aims behind the research itself. In this case, those are evident: to influence urban planning, in particular to stop the demolition of the neighborhood, and to demand an active role for the residents in the decisions over the transformations of their territories. A very different thing than what they call ‘neighborhood participation’.

The web laciutathoritzontal.org is online! It has tens of documents, hundreds of articles, thousands of photos on the neighborhoods of casas baratas in Barcelona!