A criminal network based on the allocation of public contracts linked together public employees, politicians from all the political spectrum, left-wing social cooperatives, neo-fascist groups, journalists, and the infamous mafia clan known as the "banda della Magliana".

Following the policies of the previous left-wing administration, Rome's right-wing city council is executing a series of fast and almost illegal evictions against the few rrom settlements still resisting within the city (see Amnesty International declaration on 9/28/2012 eviction in Tor de' Cenci). The pretext are the alleged "problems to circulation" and the need for "urban decency", in a city in which the inauguration of a store can paralyze traffic for a whole evening, and where the parties ruling the city council break the norms on the use of public spaces. The residents of the settlements, some of which have been living more than 15 years in Rome, are forced to move to the extreme periphery, in isolated "solidarity villages" under a strict surveillance: often they resist actively to deportations. These intervention inevitably summon back the memory of the policies towards the popular neighborhoods in Rome's center during Fascism (1921-1945): the residents considered less valuable were evicted towards the suburbs, and forced to live in borgate neighborhoods, poorly built and cut off from the town.
The Roma that arrived to Istanbul in the year 1000 settled here: the city still was called Costantinopolis. After a thousand years of cohabitation, the neighborhood of Sulukule was the first victim of the ferocious wave of gentrification that is at once globalizing and turkeyzing the city. 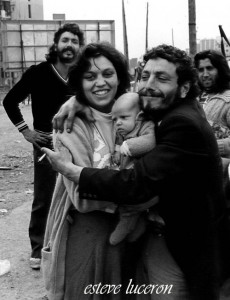 "The last gypgy settlement in Poblenou has been evicted" as was announced in Barcelona's newspapers on october 6th, 2010. But if we read better, the real news are that there had been no eviction: too many children were living in the settlement. When newspapers deal with the item of gypsy settlements in Poblenou, industrial neighborhood of Barcelona undergoing a big urban renewal process, they always approach it as if this settlements are about to disappear, like if they were pintoresque remainders of a past now gone f According to the press, "the last settlements in Poblenou" had already been evicted in 2004 in carrer Agricultura, or in the Oliva Artés factory in 2003. When they speak of gypsy settlements, they always use the word "barraques" (slums), a particulary thick term: the struggle against Barcelona's slums was one of the victories of grassroots movements in the 60s and 70s. So, these news about the gypsies and their shanty towns so close to the skyscrapers of the new "technological district 22@", more than a revival of the "barraquismo" as a phenomenon, they make us think of a revival of the uses of this phenomenon: an instrument that serves the purpose of giving an excuse to simplify the conflicts and contradictions that go along with this enormous urban renewal project. If the gypsies and their slums belong to the past, and the skyscrapers to the future, every eviction can appear as a debt with history. Social policies, are the real remainder of a past now gone. Read more
During 2005-2010 there have been about 1 million evictions in Istanbul. The residents of gecekondus are evicted to enormous public housing estates in the extreme periphery, where they are hit by intents to "civilize" and normalize the population - almost always Kurdish, Roma, Armenians or low-class Turkish.
Polígono sur. El arte de las tresmil, de Dominique Abel (España-Francia, 2003) WATCH THE ENTIRE MOVIE. Life and art of the gypsies who lived in the historical districts of the center of Sevilla, evicted and now living in the neighborhood known as the "3000 viviendas" in the Poligono Sur. "Our roof was the sky. Now we have houses; heating; fridges; but we miss what we had before, those ideals we had before. Do you remember how it was in Triana, we had nothing to eat but we were in grace of God, with only a tomato, singing and dancing, no shoes, we didn't get ill".